Over the last few weeks I have brought you a selection of some of Indonesia's incredible primates in all their glory, running free and wild, living out their brilliantly complicated lives in some of the world's greenest parts. I'm really starting to love Indonesia's animals! The positive news is that so do many other people; the bad is that their love isn't always expressed in the kindest ways... 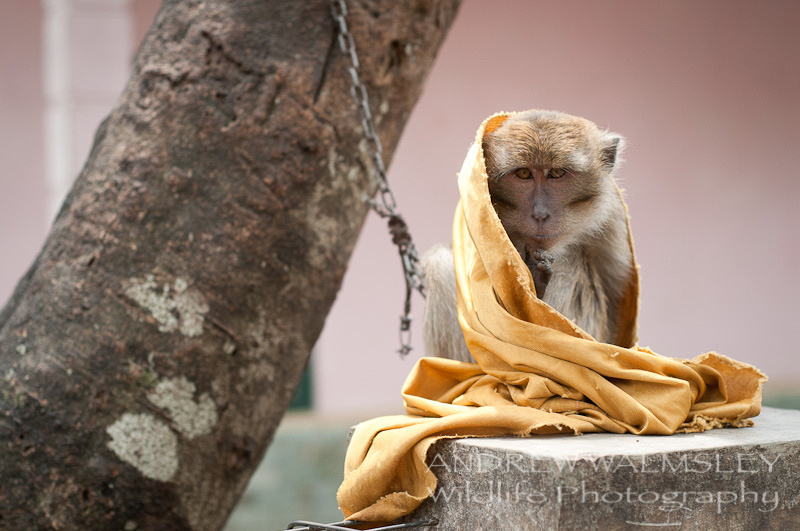 A long-tailed macaque sits out the rest of his days on a post, chained to a tree. In the wild he would be a vital link in a complex social network; here he has an old blanket for company.

Many people throughout Java own animals. There are several huge animal markets that sell a plethora of wildlife, from fish to birds to cats to monkeys. Most of us are familiar with TV scenes of whole ecosystems crammed into tiny cages in dark, hot and smoky rooms, changing hands for a few pieces of crumpled paper. Many of the poor souls on display are taken into this trade as an infant, their mother having been wounded or killed as part of the process. Some are sold as pets, forever to be wired and chained in the blazing sun for our viewing pleasure. And pleasure is what they give us. Regardless of the costs to the animal, emotionally, socially and physically, we will have our pleasure. 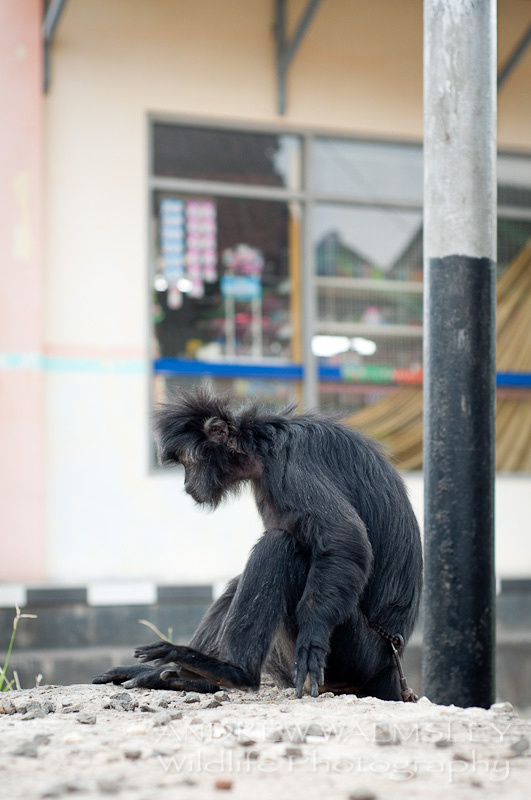 An ebony langur sits at the side of a busy road, a length of bike chain restraining her. Her owner was happy to show her off to me - the problem is that he simply doesn't understand her needs

Now, it would be very easy to sit back and shake a judgemental finger at other countries, governments and peoples, but this is truly a global problem. Certainly, the chains and suffering may be more visible in the images here, but I would struggle to find the time to type all the cases of primates being used for our pleasure that many of us would recognise. Even from just the last couple of years I could mention 'The Hangover' films, Costa Coffee adverts, viral videos of lorises being tickled and grasping at umbrellas, or monkeys riding pigs. How many of us watched them and laughed? I'll put my hand up and admit that I used to enjoy the now classic PG Tips adverts featuring young chimps riding skateboards - in fact, so ingrained is that image in my mind that the very mention of the brand floods my vision with vivid scenes of apes in bright woolly jumpers, tottering around with cups of tea. So, the image of a 'funny monkey' is one that we can all relate to - maybe it's time to allow our empathic nature to shine through and look a little deeper into the tortured characters who we find it so easy to point and laugh at... 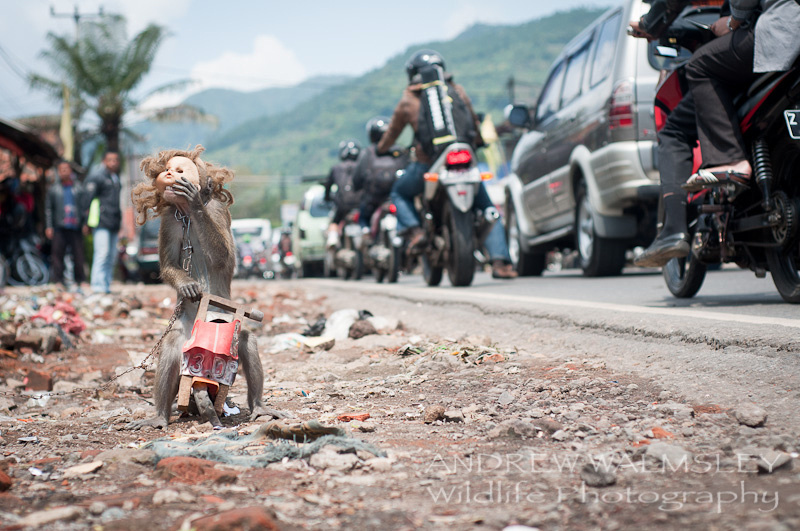 Welcome to Hell. A long-tailed macaque performs tricks at the side of a busy road, masked in a doll's head.

...which brings me on to some 'funny monkeys' that we may not be able to laugh at quite so heartily. The stark realities of these animal's lives are there for all to see, forever bound to the side of a road, scratching out their legacy amongst our waste while we ride on by, barely giving their pitiful existence a second glance. This is the world of the 'topeng monyet', or masked monkey.

They start their lives in much the same way as those in the pet trade, snatched from the wild and handed over to a trainer, who cruelly punishes it until it can do 'tricks', such as riding a bike, carrying little loads, even prostrating itself on a monkey-sized mat to take part in his daily prayers. Many of the tricks are enacted with the enslaved performer wearing the head from a little girl's doll, presumably to accentuate the comic appearance, although whether this is achieved is up for debate - personally I find that the blank eyeholes and cracked visage adds to the gruesomeness of the spectacle on show. All this is usually carried out in the blazing heat: it often exceeds 35C in the shade here, and there is never any of that on offer to the animals. 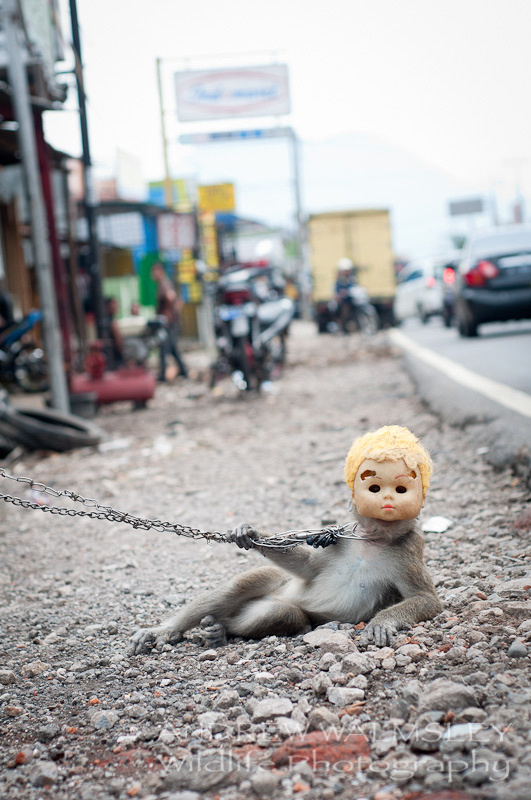 This trick is apparently known as 'The Supermodel'. This image haunts me every time I see it.

This, then, is the life of a performing monkey. I know that the dusty roadside above may appear to be in stark contrast to the glossy movie screens that we are more familiar with, but the simple truth is this - primates are not pets or performers and never should be. Their need for social structure and support is just too ingrained in what is, when it comes down to it, a wild animal.

The two groups who I would like to introduce you to today are both working with local government and on the ground with an aim to ensure that no more souls will ever have to endure this terrible treatment. The first, Jakarta Animal Aid Network (JAAN), is based in the Indonesian capital, rescuing the monkeys and, where possible, releasing them back into the wild on a secluded island. They are also petitioning the Indonesian government to make the practice of the topeng monyet illegal, an essential first step towards more secure prevention.

The second group, it may surprise you to hear, is based in Cornwall, in the UK. Wild Futures is a sanctuary that rescues and rehabilitates monkeys from the UK primate pet trade, something that many people are shocked to hear exists at all. Many of the monkeys that they care for are capuchins that originate from South America, and their stories are almost identical to those of their Indonesian cousins. Captivity does terrible things to any wild animal, but the considerable intelligence of primates leaves them particularly susceptible to severe stress.

As always, a few clicks on your mouse and maybe some quick presses of the numbers could help ensure a better life for those who are unable to help themselves. I mentioned in a previous post about the tough realisation that some of my images may be capturing some of the last moments of a species upon this planet - in this case, I sincerely hope that my photos will be among the last of such unnecessary cruelty. This trip is proving to be a huge rollercoaster of emotions for me, I never expected to find myself so attached to everything that appears in front of my lens - I hope you can share some of this attachment with me, as I really do believe that uncovering our true empathy is the key to our survival... tune in for more adventures soon...

Tamsin Orr-Walker(non-registered)
Amazing images Andrew and as you've said education and developing empathy is the key to helping species. Sometimes difficult to see how this can be done particularly in places where life is often hard and more often that not seen to be expendible. Great work.
Jamie Unwin(non-registered)
absolutley stunning, such emotive images. i had to double take when i saw the images, couldn't believe it was actually real. breath taking andrew!
Tyroanee(non-registered)
We are what we hated about the past, we are now in the rabbit hole of insanity thinking we are sane.
Shirley McGreal(non-registered)
This is very touching. And we do have sanctuaries in the United States like Jungle Friends which cares for washed-up South American pet primates who have outgrown pethood and are thrown away by their "owners," few of whom donate a cent for the years or decades their grown-up baby monkey may live. Mindy's Memory cares mainly for washed-up macaques. We at IPPL have some ex-pet gibbons, one has been with us 30 years. Things are also complicated in the United States because many lab monkeys are now getting released to sanctuaries. If they wanted, the Centers for Disease Control could stop the US trade on public health grounds (bites, often severe, and assorted diseases). But CDC does nothing. And so the suffering goes on. All over Asia. Over most of South America. A happy exception being Australia, where there are now said to be only FIVE primates remaining as primate pets.
Cheryl(non-registered)
Absolutely heart breaking. Almost unbearable to view really. I can only imagine what it is like to be right there, seeing their suffering and unable to stop it. But, you are raising awareness, which is no small thing. Thank you.
No comments posted.
Loading...
Subscribe
RSS
© Andrew Walmsley Photography
User Agreement
Cancel
Continue